The Supreme Court found that the U.S. Government breached a commitment to Pay $12 Billion to Health Insurers, but are these payments going to help beneficiaries?

The U.S. Supreme Court ruled on three cases brought by four insurers over whether insurers are entitled to $12.3 billion in unpaid risk corridors payments from 2014 to 2016.  The reactions to the ruling mostly fell along political party lines.  This article presents questions and objective data to consider.

Did the Government make a promise to pay $12.3 billion to health plans and then break that promise?   According to the Ruling by The U.S. Supreme Court, the answer is yes.  As Justice Sonia Sotomayor stated, the ruling is based on “a principle as old as the nation itself: the government should honor its obligations.” Insurers will receive billions in unpaid risk corridors payments, but it could take time for these funds to flow to insurers. And the impact of this decision will vary significantly by state and insurer.  Were these extra protections necessary for insurers?  Do they increase competition in the Insurance Exchanges?  Do they benefit consumers?

History of Risk Corridors in the Affordable Care Act

The individual (or “non-group”) insurance market changed substantially under the Affordable Care Act.  In 2014, the Affordable Care Act instantiated new rules delineating: 1) the type of plan that can be sold, 2) required insurance companies to guarantee access to everyone regardless of health status, and 3) limited the factors insurers could use in setting premiums.  Before that, fissures in public insurance and deficiency of access to affordable private coverage left millions of Americans without health insurance. The Affordable Care Act filled in many of these gaps and provided new coverage options via Health Insurance Exchanges (HIEs).   HIEs were designed to enable consumers to obtain federal tax credits to help them pay their premiums.[1]

Because of the new rules promulgated by the Affordable Care Act, insurers did not have the requisite actuarial experience to accurately estimate the newly insured’s use of medical services. The Affordable Care Act requires that insurers must file their rates roughly 18 months prior to the end of the following rating year.[2]  Therefore, decisions made in 2014 by health plans had consequences in 2016.  Also, in 2015 and 2016, there was substantial turnover among insurers in the individual market, as some initial players learned that they were not able to compete effectively under the new market rules.[3]

Risk corridors were intended to limit both the amount of money that a health insurance plan can make — and how much it can lose — during the first three years, it sells on the health insurance exchanges.  In part, the intent was to encourage insurers to enter the HIE markets by mitigating their risk, or “…to protect against the effects of adverse selection…”

Risk corridors were intended to be a temporary feature applied to individual, and small group qualified health plans (QHP) from 2014 to 2016.   Risk corridors only applied to plans sold on the Exchanges via HIEs.

Risk Corridors may look like a viable downside mitigation mechanism, but the devil is in the detail. According to the Affordable Care Act, HHS Notice of Benefit and Payment Parameters for 2014 Final Rule,[5] the steps involved in a risk corridor calculation are below.  The critical component is to note that “MLR” or Medical Loss Ratio is a factor.  It will become clear why MLR is essential later in this article.

The program required profitable insurers to pay funds into the program and used these funds to subsidize insurers with higher medical claims. Congress subsequently inserted riders in appropriations legislation, which made the risk corridor program budget neutral—meaning the program would not pay out more money than it received.[10]

Risk corridors protect insurers, but the accompanying rules of the Affordable Care Act do not consider the funds that insurers  spend for:

The logic is that the inefficiencies of fraud, waste, and abuse that go into the risk corridors are a cost of doing business. Therefore, insurers are not allowed to include the costs to prevent fraud in their cost formulas.  Yet, American taxpayers are backstopping insurance company losses, which can be caused in part by fraud.  Here is how this conundrum came about.  it is estimated that Medicare fraud is significant.  The Centers for Medicare and Medicaid stated in 2020:

Expected Benefits to the Consumer via Market Competition

Some have argued that the most crucial benefit of risk corridors was to consumers.  Risk corridors, so the logic goes, were intended to encourage small insurers to participate in the healthcare marketplaces to provide competition to large insurers.   When the risk corridor payments were withheld, some small insurers lost money, exited the marketplaces, or went out of business.  This allegedly caused harm to the consumer.  Supporters of risk corridors have pointed out that Medicare Part D adopted risk corridors under the Republican Bush Administration. As one supported noted, “ Medicare’s successful prescription drug coverage program (Part D) also uses risk corridors – and if the most recent [2012]  trustees report is to believed (see Table IV.B11), Part D’s risk corridors are far from a bailout for insurers. …”  Comparing 2013 actuarial data to 2018, the picture looks quite different.  See the Actuarial Analysis in the next section.

Based on reports from the Secretary of the Treasury and in the Annual report of the Boards of Trustees of the Federal Hospital Insurance and Federal Supplementary Medical Insurance Trust Funds:[11], [12]

At first glance, it might appear that the Government, and therefore taxpayers are not contributing as much to Medicare Part D in 2018 as they did in 2012.  Unfortunately, costs to the consumer have increased 155% as the derived standard annual premium rate increased during the same period.  So, objective data suggests that Medicare Part D is not a model of success for risk corridors in that it has neither lowered costs to the taxpayer or to the consumer. 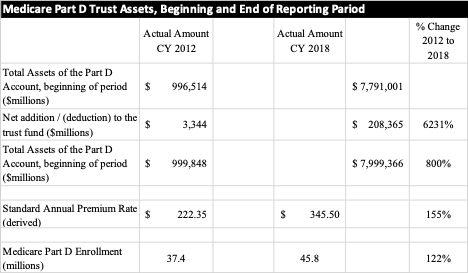 Therefore, in the end, the consumer did not benefit from risk corridors in Medicare Part D.  Under the insurance market where there is not a single-payer system as there is with Medicare Part D, could the outcome be different?  Next, take a look at the inefficiencies legislated into the Medical Loss Ratio rules for commercial plans available on the Exchanges.

Every year, the Centers for Medicare and Medicaid Services loses an estimated $65 billion to criminals who defraud the health care system.[13] This excludes fraud losses incurred by commercial payers who offer coverage in the Health Insurance Exchanges.

Section 2718 of the Affordable Care ACt established medical loss ratio (MLR) minimums establishing a minimum floor on the percent of premium collected that is spent on providing medical services and improving the quality of care.

Under the Affordable Care Act , insurers must spend a certain percentage of their premium revenue—80 percent in the individual and small group markets and 85 percent in the large group market—on health care claims or health care quality improvement expenses. The remainder of the premium revenue can go towards other expenses, such as administrative expenses, profit, and marketing.

If insurers fail to meet an MLR of 80 or 85 percent (meaning they spend too little of their premium revenue on health care claims or quality improvement), they must rebate the difference to their enrollees.[14] Health plans must spend on a combination of reimbursement for medical services and “activities that improve health care quality.”[15]  The ACA’s MLR rule took effect in 2011.[16]

The Centers for Medicare and Medicaid (CMS) provides: “The list of activities excluded as QIA includes—(1) Those activities designed primarily to control or contain costs; and (2) those that establish or maintain a claims adjudication system, including costs directly related to upgrades in HIT that are designed primarily or solely to improve claims payment capabilities or to meet regulatory requirements for processing claims…”.[17]  MLR rules hamstrung health plans by preventing them from including expenses in the MLR calculation designed to modernize their computing systems, make them compliant to new Standards, and to avoid fraud.  As noted above, the MLR calculation and its limitations are used in the risk corridor calculations.

In his dissent of the U.S. Supreme Court opinion, Justice Samuel Alito said the decision is a massive bailout “for insurance companies that took a calculated risk and lost. These companies chose to participate in an Affordable Care Act program that they thought would be profitable.”  Alito stated that he believes that the opinion is a bailout for health plans.   At the very least, this bailout to health plans should include provisions for greater efficiencies and anti-fraud. Clearly, efforts of health insurers to reduce fraud are “activities that improve health care quality.”   How could this be implemented?

[8] Note that Allowable Costs include quality expenses and IT expenses but is based on the same MLR standard and therefore excludes expenses to pursue fraud as discussed in the MLR section of this document.

[14] The Medical Loss Ratio provision requires insurance companies that cover individuals and small businesses to spend at least 80% of their premium income on health care claims and quality improvement, leaving the remaining 20% for administration, marketing, and profit. The MLR threshold is higher for large group insured plans, which must spend at least 85% of premium dollars on health care and quality improvement. Insurers failing to meet the applicable MLR standard have been required to pay rebates to consumers since 2012 (based on their 2011 experience). Currently, MLR rebates are based on a 3-year average, meaning that 2020 rebates are calculated using insurers’ financial data in 2017, 2018, and 2019. Insurers may either issue rebates in the form of a premium credit or a check payment and, in the case of people with employer coverage, the rebate may be shared between the employer and the employee. Insurers will begin issuing rebates later this fall. Rebates issued in 2020 will go to subscribers who were enrolled in rebate-eligible plans in 2019. See https://www.kff.org/private-insurance/issue-brief/data-note-2020-medical-loss-ratio-rebates/ and https://www.healthaffairs.org/do/10.1377/hblog20200427.34146/full/

[15] Loss ratios based on a calculation using a three-year rolling average, meaning that the regulatory standard is applied each year to the insurer’s average loss ratio during the prior three years.